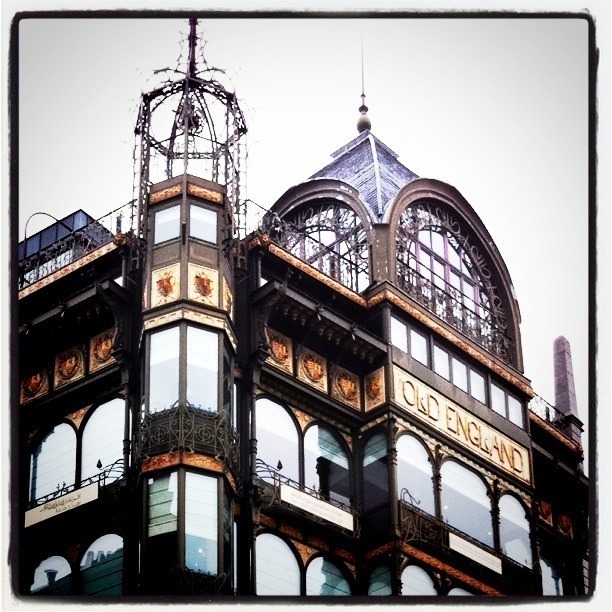 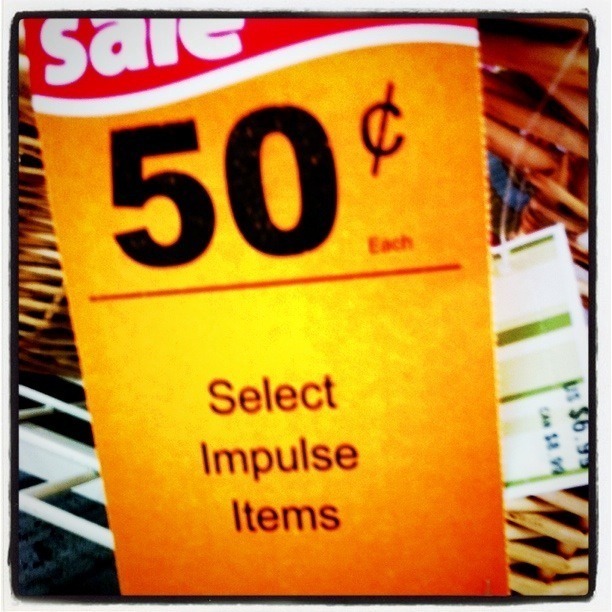 I saw this attached to a basket by the checkout at a Michael's craft store today. I like the transparency in their sales pitch. 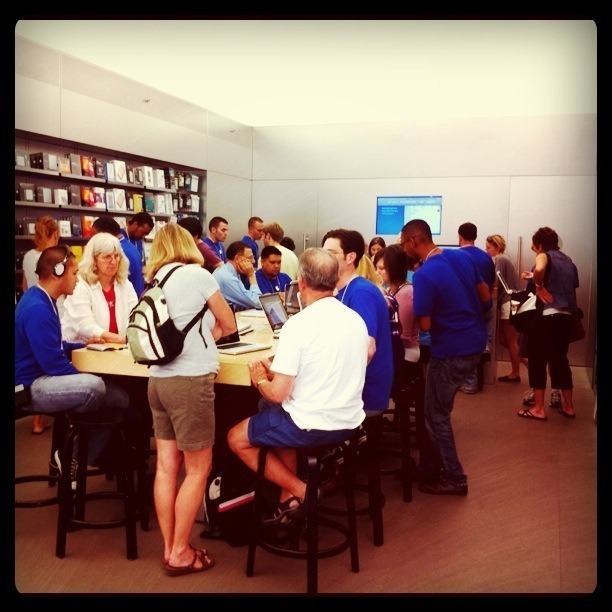 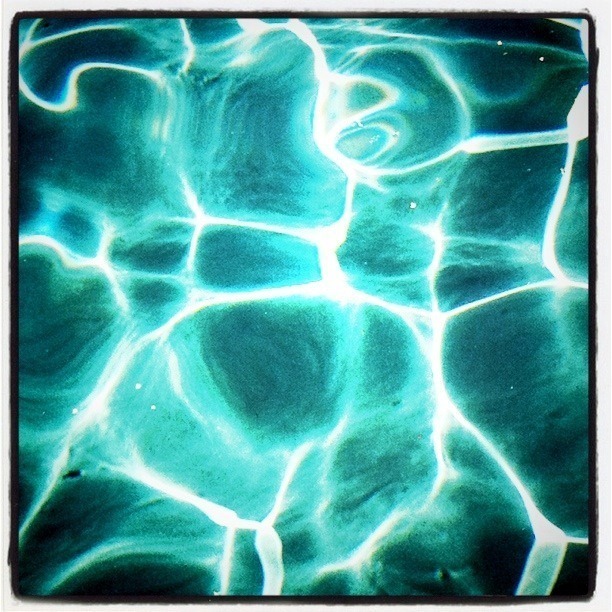 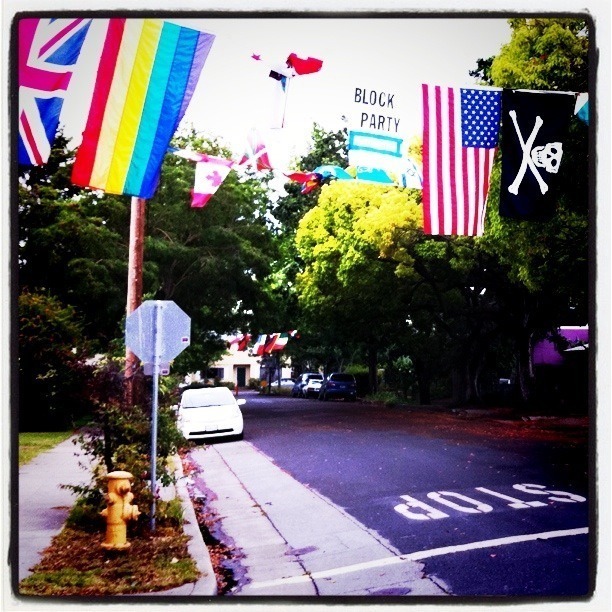 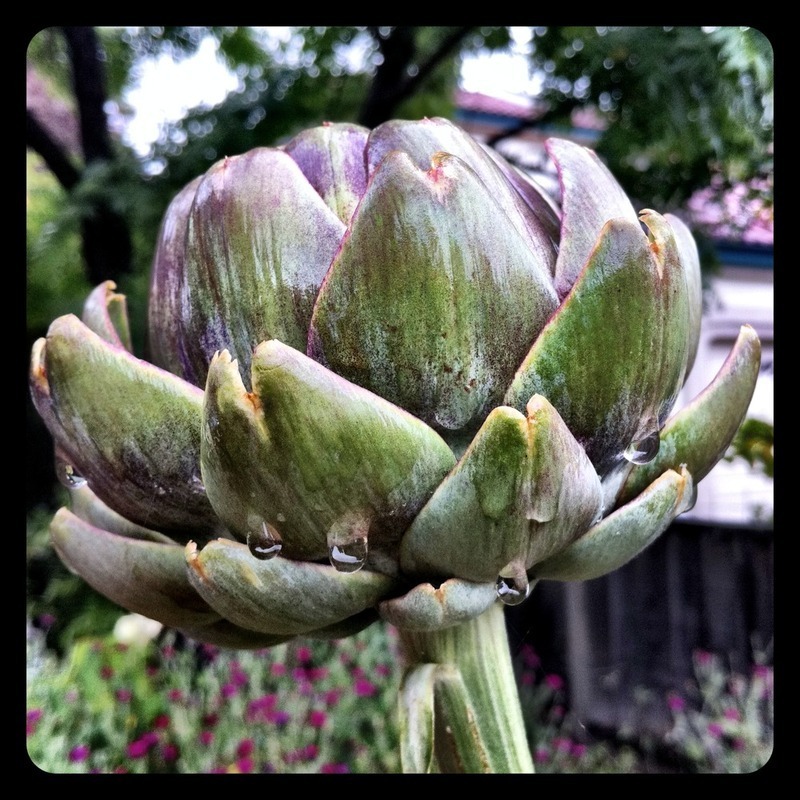 Harbor seals have priority at the Fitzgerald Marine Reserve in San Mateo County, about 20 miles south of San Francisco. The place is famous for its tide pools, but it's not uncommon for vast areas of its inter-tidal rocks to be coned off in order to give the seals some peace. There are around twenty of them lounging contentedly in the photo below. 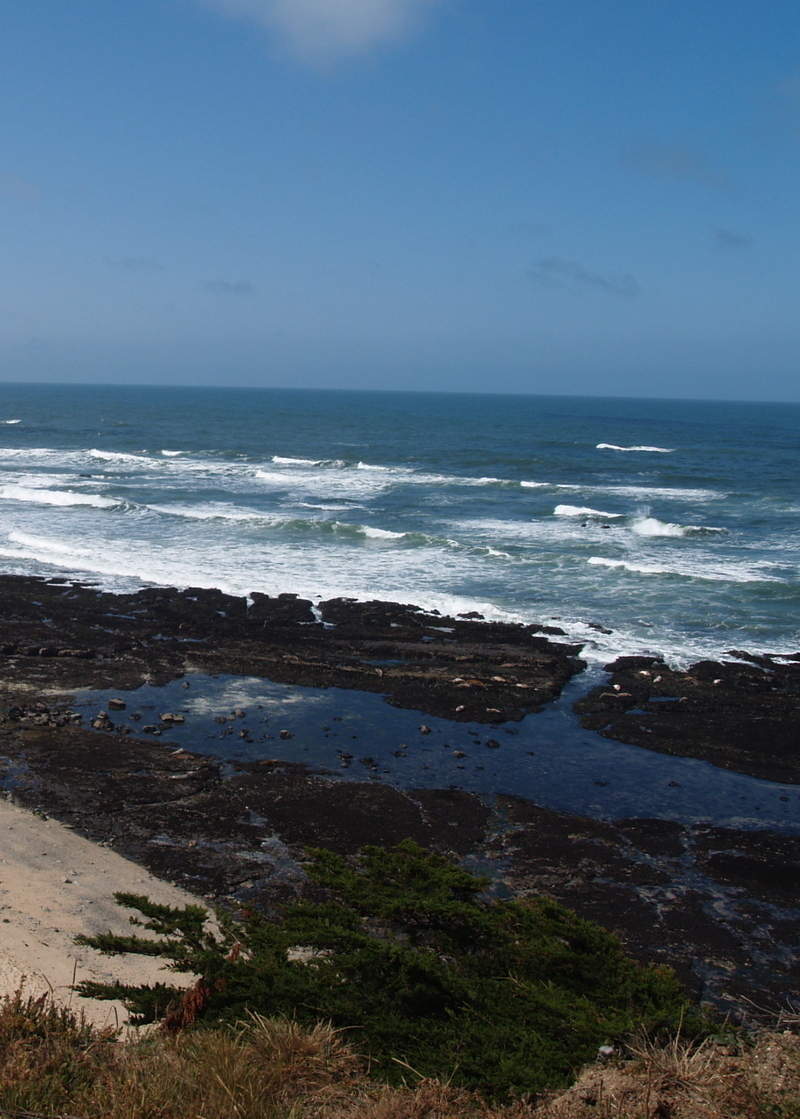 Until my most recent visit, though, I'd never been particularly impressed with the quality of the tide pools at the Reserve. They always seemed to present rather meagre finds and be stripped of the seaweeds that usually indicate a thriving tidal community. But this time the seals were in such abundance that a revised human-exclusion zone forced me to go south, instead of my usual route north up the beach.
It seems like I've always been going in the wrong direction. 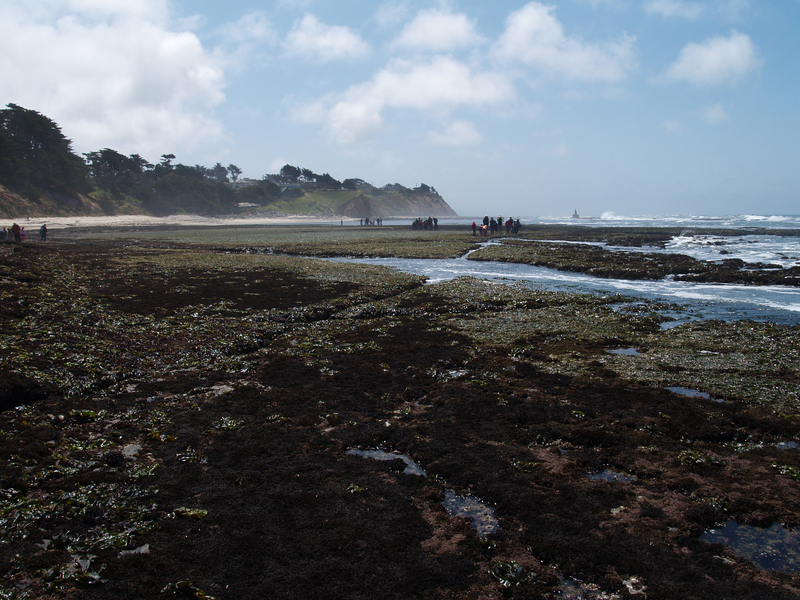 We climbed up the cliff path that takes you from the Fitzgerald car park towards the Moss Beach Distillery, which is in the center of the picture above. Entering the beach pretty much under the Distillery, we found an extensive rock shelf exposed by the low tide. It was carpeted with seaweeds of all kinds and the pools were teaming with mollusks, rock fish, sea stars and crabs. The third graders I was accompanying were in heaven. 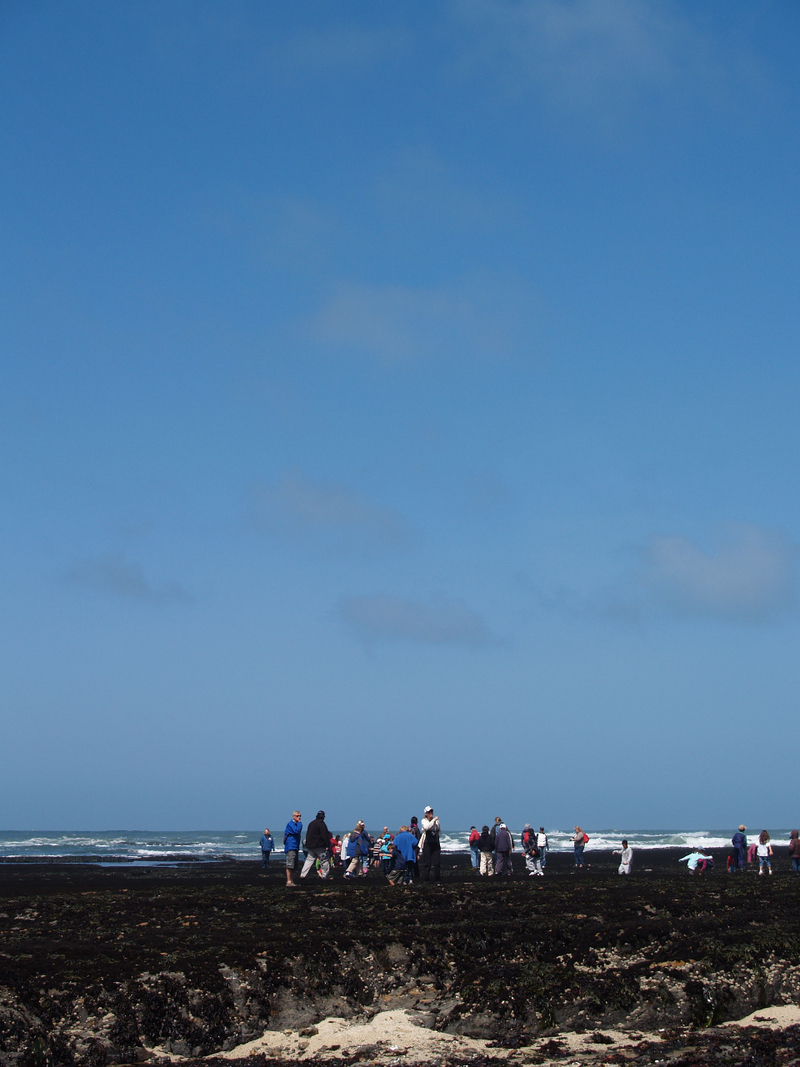 The tide was low enough and the waves sufficiently puny for us to walk out to pools that are usually only briefly exposed. They were full of the most beautiful purple anemones. 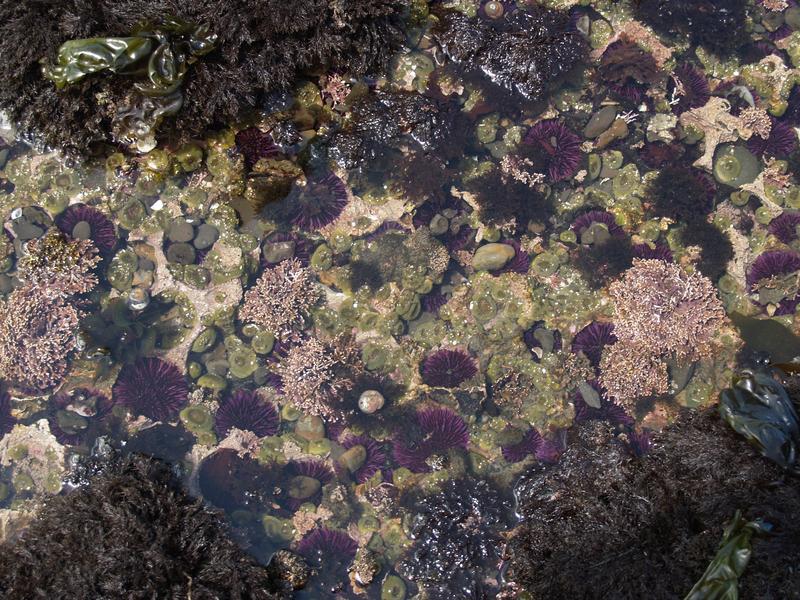 Despite the prediction of Mr. Harold Camping and his Family Radio International I'm sitting at my desk as May 21, 2011 winds to a peaceful (or at least no more globally cataclysmic than usual) close.

Watching the river of news and reaction flow by on Twitter, I'm seeing both ridicule and also an undercurrent of relief. 'We knew he was probably wrong, but - really - you never know,' pretty much sums it up.

But the jaunty dismissiveness ('People are making Rapture jokes like there's no tomorrow' 'Worst. Rapture. Ever.' ) has struck me most. Compare it with the iconic Beyond the Fringe sketch about the end of the world written by and featuring Peter Cook, Jonathan Miller, Dudley Moore and Alan Bennett. Cook plays a messianic guru elucidating the specifics of the end of the world to three fawning acolytes. 'When will it be, this end of which you have spoken?' asks Miller.  'In about thirty seconds time, according to the ancient pyramidic scrolls… and my Ingersoll watch,' replies Cook.

They wait, and prove to have their timing wrong again. 'It's not quite the conflagration I'd been banking on,' Cook states.

This was 1961. The Cold War was at its height. The public fear of global nuclear war was dire. No one who heard Moore's line 'And will this wind be so mighty as to lay low the mountains of the earth?' would have failed to understand that such an annihilating wind could, indeed, end their world at any time.

It must have been a lot harder then to be funny about the end of the world. It was a mighty brave, too.

Long time Palo Alto residents will remember when there were at least five secondhand bookstores in town. Soon, we'll be down to one. Know Knew Books on California Ave. is closing, it seems after 23 years. 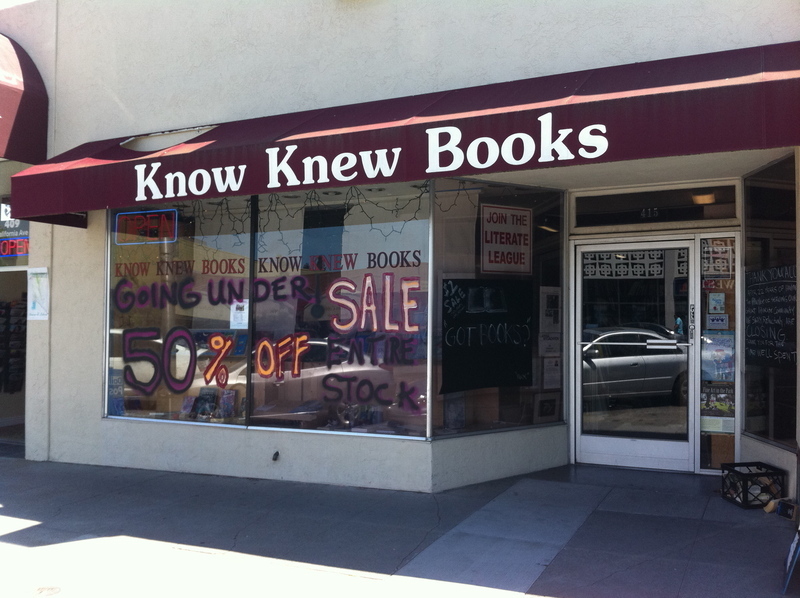 Like the many art-house cinemas this university town used to support, our local bookshops have been done in by innovations nurtured in their own back yard. Maybe a store selling Kindles would be an appropriate replacement. Or another Apple Store.  We still don't have the menswear store of my dreams, I'd like to note. But please, no more yoghurt! 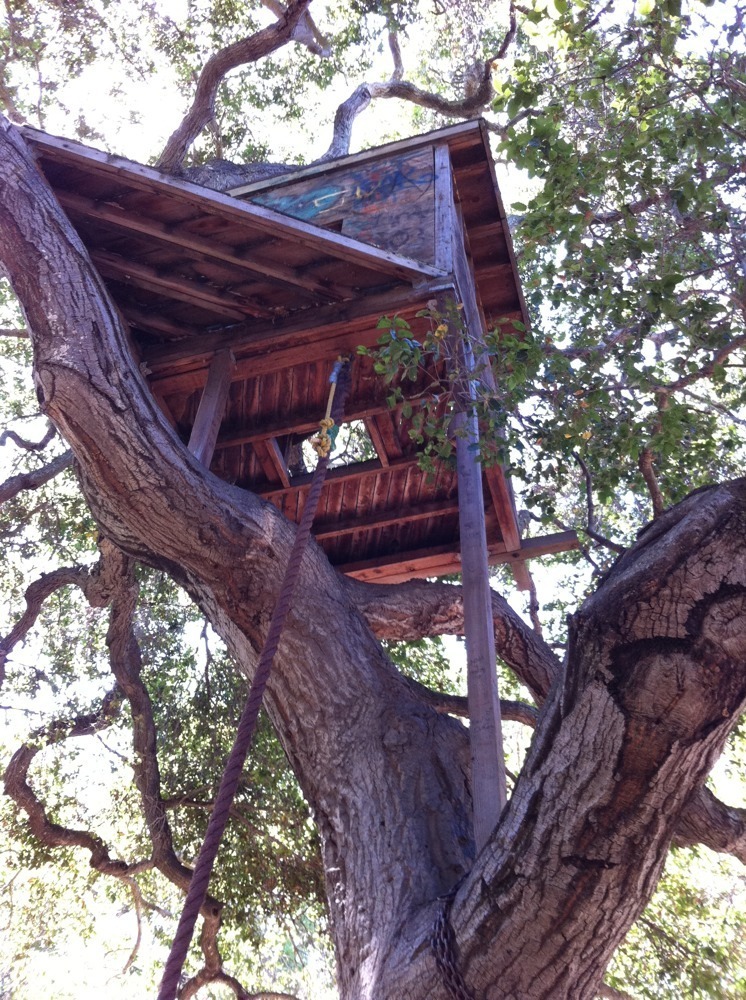 This treehouse is totally discriminatory. The only way into it is by climbing a hefty, twenty foot piece of rope. It's a massive and deliberate barrier to entry.

Sure, that means the structure is utterly ADA non-compliant,but it keeps the little kids out and all but the fittest adults, too - which is the whole point, after all. It's hard to imagine anything cooler than joining the club of children who found in themselves the strength and courage to make it up there.

The treehouse sits in a huge Live Oak at the Peninsula School in Menlo Park. Given the school's progressive philosophy and history, I wouldn't be surprised to find that friends with disabilities get hauled up there on pulleys from time to time. It's a rare place, though, where moral decisions like that pretty much have to be left up to the kids.