For years I've been on a somewhat meandering and not at all thorough quest for a really decent men's store in Silicon Valley.
Plenty of locals would say we already have one and it's Frys. Fair enough, but I'm after clothing, too, and a worldliness -- dare I say cosmopolitanism -- that Frys absolutely eschews.
Here's what I'm looking for: firstly, a clothing store that is to Silicon Valley as the Paul Smith store in Covent Garden is to London -- a place that both captures and helps define a region's unique style. So where's our poet of the tie-less shirt and the somehow-interesting-at-last khaki? Who can help us navigate that small but tricky step from the penniless student engineer affect to looking like the proto-tech titans that we all, so obviously, will one day be?
Who, moreover, can take all the cultures -- old American money, new American money, Preppy, Japanese, Indian, nerdy, Chinese, Taiwanese, Russian, extreme sportsman, Burning Man-regular, Pacific Islander, old Mexican California, it goes on and on -- that are woven into the fabric of this very particular global melting pot and make of it something truly our own?
We have mensware outposts here -- of San Francisco's tony Wilkes Bashford, for example, along with the surf chains, the mountain sports outlets, the fake-Bahamians, the fake-Hawaiians, a men's Macy's. None of them are about who or what we are, though. Right now, it's basically Dockers that define our look.
And what about accessories? In my Valley dreamscape exists a store combining the international chic of a Monocle outlet, the design rigor of an Apple store, the deeply nerdy whimsy of Berkeley's Boss Robot and the hard-assed, no-return commitment of a tattoo parlor in Santa Cruz. Oh, and let's throw in the exquisite taste of quite simply the best store in the world.
What would that add up to? Who knows. Maybe it would the great-outdoors-meets-dog flavor of Calistoga's intriguing A Man's Store. Certainly, it would sell me interesting clothes for work and play, and shoes and bags and watches that I didn't even know existed. But maybe it would also have self-launch rockets, rare Lego minifigs, steampunk cufflinks, one-off pillows found on Etsy, crazy felt octopi. Heck, it might sell me a Bentley or a tank if I wanted, but also palms and cacti, quality sailing rope, or surplus pieces of defunct labs to decorate my home. All those things would fit right in here.
Most importantly, though, it would be our own thing -- helping define for us our own look -- and that's what we're lacking.
Could such a place survive? Men here are stereotyped as uninterested in anything beyond the virtual, but they do need clothes. And Valley Man is not immune to fashion. Wander down University or California Avenues in Palo Alto of a lunch time and you can't move for the gaggles of well-remunerated male engineers (and VCs and industrial designers and lawyers and marketers), most still unencumbered by salary-draining families, mortgages or the time for expensive hobbies and yet who clearly care about how they look at least to the extent that they all dress exactly alike.
This week I thought I might have found my Valley men's store Eldorado in Hlaska, newly arrived at the Stanford Shopping Center (see picture below) and co-founded by Chad Hurley of YouTube fame. And it gets part way there.
The shelves display suit jackets over hoodies instead of shirt and tie combinations, which is right. And it has a highly enviable selection of lovely iPad carriers. The clothes are fairly interesting takes on familiar themes. I could definitely see them adding the right understated flair to pitch meetings in local cafes.
But Hlaska's selection is also limited: clothes, shoes, bags and little more. And, like many things started here, it feels like it was built to be reproduced -- and fit in -- anywhere. Scalability, after all, is a metric treasured by our VCs. Unfortunately, though, coupled with its chain-ified mall location, that pushes Hlaska far from being the sui generis, place-defining, destination store of my dreams.
For now, then, I'm still looking. 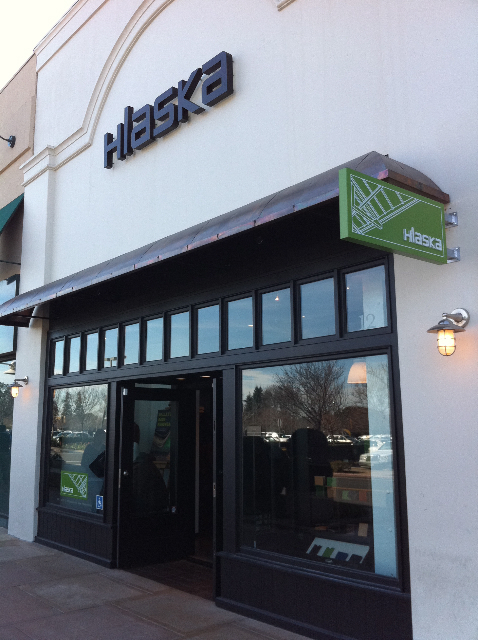 As I say, I've not been particularly thorough in my search. If you know of a truly of-the-Valley men's store, do let me know.